My travels through England took me north to York, through London and south to Portsmouth—all locations where I have friends. Fighting my planaholic nature, I decided at the spur of the moment to take a 28 hour jaunt to Edinburgh, Scotland—a fast train ride from York. The city is ancient, gorgeous and hilly. Leaving the train station, 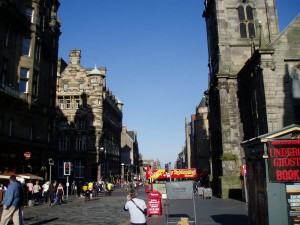 I headed straight up to the Royal Mile, the touristy and historic part of Old Town which dates from about the 17th century, where I saw a man in a kilt playing a bagpipe. Touristy, yes, but there’s a reason tourists flock to certain places. The Royal Mile is capped by the ancient Castle of Edinburgh on one end 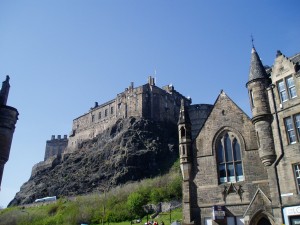 (with the oldest building in town (a church of course) which is about 1,000 years old) and the Palace of Holyrood where HM the Queen rests her head when she deigns to visit this corner of her realm.

The highlight of my time in Edinburgh centered around a cemetery. I went on a 3-hour walking tour of the city my first day where I was introduced to Greyfriar’s Kirk and its cemetery. On day two, I made my way back there to eat my lunch among the dead (when in Rome) when a man approached me who took it upon himself to give me the history of the place. The gist has to do with Kings declaring themselves gods and the people wanting nothing of it. The townspeople dacamped to Greyfriar’s where a local judge essentially made martyrs of them when he sentenced them to a corner of the cemetery without food and water in the cold of Edinburgh. And, then the ghosts starting showing up. I was assured they only appear at dusk, so for now, I was safe.

The cemetery also housed graves from the families Black, Moodie and Riddle, and if those names sound familiar, they should if you’ve ever read the Harry Potter books, because this is where JK Rowling used to hang out and write. In fact, outside the back gates of the Greyfriar’s Kirk is a school for orphans with 4 towers: the inspiration for Hogwarts.

When I left Edinburgh and York behind, I traveled to the big city where my friend Ella agreed to put me up for a few days and where our mutual friend Mandy from Portsmouth joined us. I met both of these ladies on my Neanderthal dig in Spain 2013 and it was great fun to eat, drink and be merry with them.

I’d been to London before (a lifetime ago) and being the museum buff that I am, decided to cram as many in as I could manage in 3 days. I made it to 6–5 of which I’d never been to before. For archaeology: the British Museum (you wouldn’t believe how much stuff they’ve stolen from other countries!) For art: the National Gallery and Victoria and Albert. Natural History Museum for some dinos and my favorite by far: two crazy little museums on Lincoln’s Inn Fields. The first was Sir John Soane’s museum, in the house of an architect who collected Roman, Greek and Egyptian sculpture and artifacts. The place was filled from floor to ceiling with stuff and was simply awe-inspiring. Across the square, was the Hunterian Museum in the Royal College of Surgeons, a museum filled with body parts floating in jars. I’ve read so much about this stuff—the early doctors and surgeons in cahoots with body snatchers to collect bodies to open up and learn how our insides work. To actually see these things floating away and dried on boards was a little sickening, but mostly intriguing and awe-inspiring. As truly incredible as the British Museum and National Gallergy are, there was something about these two little museums that made me really feel like I was in London.

When Mandy met up with me and Ella at the after hours event at the Victoria and Albert, the fun really began. We wandered around Greenwich 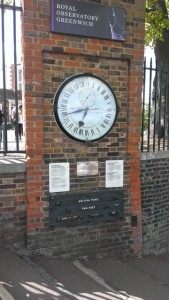 , had a pint and cake for lunch, a “jug” (pitcher) of Pimms for dinner, then off to meet Ella for drinks with some girlfriends. Standing drinking another pint, we were approached by a guy with beautiful eyes who asked us a question. When he walked away, I looked at Mandy and asked for a translation. She just shrugged and said she hadn’t understood him either. She and Ella thought he was a Geordie


(from the North) and I said maybe he was Scottish. I won. Pretty eyes came back for a chat, and and we discovered he was

He tried to enunciate a little better, then invited us to a club with him. I would’ve jumped at it, but Mandy couldn’t see the use in hanging out with someone you couldn’t understand. The eyes, did not have it, in this case. 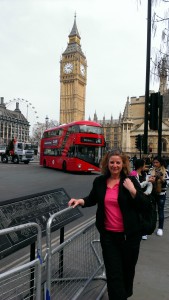 Hello all! Different kind of post here, since I’m once again actively traveling. It’s way different this time since I’ve found free ways to call friends from my phone and of course computer, so I don’t feel quite so disconnected from the world, even though I’m a world away.

I am currently in my 4th city, since leaving a week and a half ago, so there have been a lot of trains and car rides and my trip has only just begun. I spent a few days in York, England, which really has to be experienced to be appreciated. The city is 3,000 years old, and retains remains of the Roman occupation from 2,000 years ago crumbling around here and there and under things. The most visible parts of the city date from about 1300 onwards and is the English city with the most intact original fortification walls. 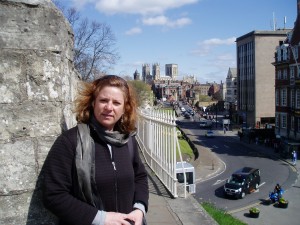 So confused! What time zone am I in?? Walls to the left, York Minster to the right.

I walked the walls with my friend Wendy (who was raised there and who has worked in archaeology and paleoanthropology) with whom I was staying, and as she politely explained the walls were “tarted up” by the Victorians. But, that was only the tippity top parts. 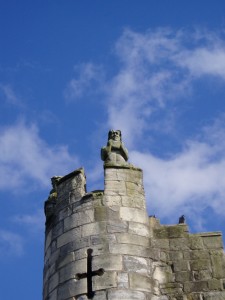 Atop Monk Bar. “He who enters will get this heavy rock thrown at your head”

The walls are interrupted by gates called bars to both let people in and out of the city and display chopped off heads, whatever the case may be.

We took a day trip to Whitby, a town of multiple charms where we searched for–and found–150 million year old ammonites along the beach. It’s fun knowing other people who like to dig things up. 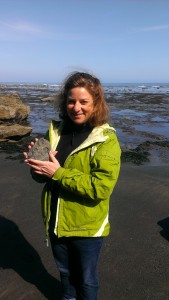 Our sense of a good time is pretty much the same. I have been lucking out with the English weather. It’s been just a bit chillier than Seattle, but not much rain, so we walked along the cliffs to pass by the Whitby Abbey which inspired Bram Stoker in Dracula.

I spent 28 hours in Edinburgh, a few days in London and am now in Portsmouth, England. I’ll have to figure out how to write more posts without boring everyone to tears with the length, but there is so much to tell!