In September of 2011, after my father passed away, I escaped altogether for a trip that included 10 days traveling alone in Ireland.

At a pub in Dublin one night, I struck up a conversation with a pair of musicians from Cork in a place called the Hughes Bar near the B&B where I was staying. 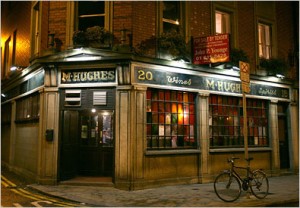 At the Hughes, I was lucky enough to catch a “Trad Session” of traditional Irish music and met these two men, who were apparently experienced musicians in their own right (in their words). Now, I don’t know a lot about Irish music (Van Morrison is about as far as I go) but these two men told me that the music was exceptionally good that night,

When asked about my itinerary for the remainder of my time in Ireland, they insisted that for the best music in the country, I go a pub called the Crane Bar in Galway, where I was headed a few days later. 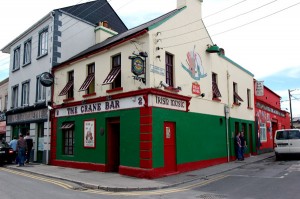 In fact, as soon as I checked into my B&B in Galway, I discovered that I was within a 10 minute walk of this very pub! I gussied as best as I could, screwed up my courage and in I went. The music was just about to start on the 2nd floor, so I made my way to the bar, grabbed my token Guinness (when in Rome…) and forlornly looked around.

As a single woman in a strange country, I felt conspicuously alone, but fortunately, that lasted only about five minutes, since I spotted a stool at a table close to the front of the tiny stage. I pushed through and asked the two men seated at the table if I might sit, to which they of course replied “YES!” Alas, there are also benefits to being a single woman in a strange country as well.

In no time at all, the gent to my left and I struck up a conversation. He was a professor from Germany who was about to teach a semester in Dublin on an exchange program through the EU. We talked all night, non-stop, pausing for drinks as we made plans to meet in our travels around the country. Queue the violins! Ah, but this being a Trad Session, they WERE no violins, only fiddles.

And, those fiddles were interrupted by a local Galwallian woman (are they like Mainiacs, Massholes and my favorite: Saskatchawannabes?) woman who started her very own version of Lord of the Dance in the corner. She was all stomping feet and sloshing beer. This little lass was LOUD and she wanted to continue dancing, regardless of the bartender’s multiple requests that she STOP RIGHT NOW.

And, as amazing as it sounds, she was in fact escorted out of The Crane and onto the sidewalk for, get this: dancing too LOUDLY!

But, should I ever return to Ireland, off to the Crane I will go!