I got this crazy idea a couple of years ago that I wanted to live in Madrid for awhile, like I did when I was a junior in college. Now that I’ve been here for a few weeks (and in my own flat for 1.5 weeks), I realize that, when your gut tells you to do something, as crazy as it may sound to others, it’s the right thing to do. 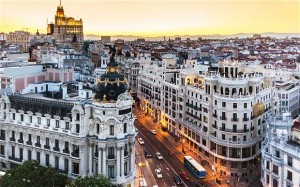 The Gran Via in the center of Madrid

This city is incredible in so many ways. The architecture is gorgeous. I have to keep myself from gawking up at the centuries old buildings that line the neighborhood where I live. They are majestic and classic and this city knows how to strut its stuff at night. Madrid is a city, for sure, but it differs from any city I know in the States. It’s sprawling and the neighborhoods of all stripes flow easily from one to the other, but the people are warm and friendly. Ask for directions, and you’re likely to be personally shown which way to go.

Puerta de Alcala, at the edge of the Retiro park and the calle Serrano.

It’s September now, and the heat is still packing a punch, with temperatures in the 80s up to over 100. The city has accumulated centuries of grime, slime and smell, so along with the beauty comes the stench. It’s got its own special mixture of smells, just like NYC. It’s a combination of metro station, jamon serrano, old musty buildings, garlic and pee. It’s unfortunate, but it’s part of the place.

I cannot get over a couple of things about the people here. The women dress beautifully. Anyone over about 60 years of age is dressed impeccably and all have a pronounced respect for others. I just discovered that my friend’s 14 year old son gets etiquette lessons in school and it shows. The youth are very polite and not only know how to talk to adults, but are not rude, overly loud and threatening as some can be in the US. I witnessed a conversation in the Retiro park my first week here. A guy of about 20 was on roller blades playing one on one hockey in the middle of a large, pedestrian-only avenue. An older lady in her 70s stopped him to tell him she thought it was dangerous, because a passerby could get hurt. He replied that the park was for everyone, and when I looked back after walking about 50 paces on, there they were, still discussing the matter. It’s stunning to me that a city this big can still retain such a sense of decorum and respect.

The Spaniards also have a healthy respect for family. Go out on the street any time of day and you see children with families. Shopping together, having tapas at night with the family, and very late at night, since that’s the coolest part of the day. I love the fact that the kids look like kids. I’ve seen so many little sisters dressed alike and it makes me smile still. I honestly haven’t heard one screaming child in a store, restaurant or metro station. It could be dumb luck on my part, or, maybe not? I’m not sure exactly how this respect and civility have been cultivated, but what I do know is most families eat together and that for the most part, kids live home into their 20s or until they get married. Adult children are also expected to care for their parents, as is the case with my two girl friends here.

To me, this just feels like the way the world should be, but this could be because I was raised in a similar fashion (except the staying at home until I got married part). I spent 10 months here when I was a junior in college, and every time I’ve come back to visit, I get a sense of peace, as if this is the way the world is supposed to be.

My friend Gloria lives near the Plaza de Toros in Madrid. In fact, that’s the metro stop to get to her house, right in front. 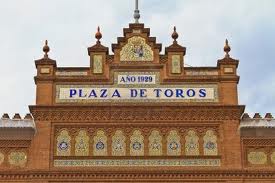 Ya gotta love the Moorish influence in the architecture. This baby seats 25,000!

I know, I know, bullfighting is atrocious, but, hey, I didn’t choose the country’s sport. Is it worse to kill bulls than killing spectators of the country’s other favorite sport? Futbol or soccer to us ‘mericans.

Anyway, it turns out, there are special breeds of bulls for the fights, one of which is called the Toro Bravo. In fact, Gloria took me on a drive into the Madrid countryside and pointed out the farm where these Toros Bravos are raised. In Spanish, bravo means angry, which made sense to me. These are mean bulls who want to gore everything in sight…perfect for a bullfight!

So I got to thinking, what makes these bulls angry? I figured they must torture them somehow during their lives to REALLY piss them off. So I decided, they must deprive the bulls of nice shady trees and having access to ready-to-mate cows. Maybe they prod them with pointy sticks constantly?

Wrong! These bulls live the cushy life, before being herded into the ring. And, in shops and restaurants around the Plaza de Toros, you can buy the bull meat to eat.

Ever seem a bullfight? This is a video shot by either my grandfather or my father in 1949 here in Spain and posted by my brother Jose Rodriguez to Youtube. Enjoy (or not!)