Greetings again from Dolores de Pacheco. We are in our final week of the three week dig at the cave in the Cabezo Gordo (which means small, fat mountain). Although we have not found any Neanderthal bones, we have come across some other interesting finds.

All along, we’ve been finding flakes. These are the rejects of rock that have been chipped away to make points, scrapers and spears. Imagine a handsized rock in one hand, called the core. It’s worked at with a rock in another hand by your neighborhood Neanderthal rock worker. One rock is hit against another until slices of rock chip away…flakes. Yeah, I guess that’s cool, but I’m thinking “flakes? big deal”. One day, as I was digging onsite, I found nothing and was so discouraged. One of the others told me I was probably sitting exactly where a Neanderthal sat to work some of the flake points and I thought “yeah, right”

But then…we found the core and we started finding horse mandible and teeth and more flakes. I came across a horse tooth, and as we all brushed, more and more small, bits of bone started to appear “in situ” around the teeth. It makes sense that this was the horse’s head! 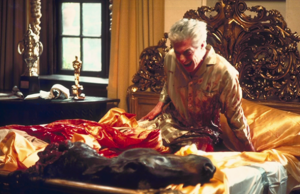 Not quite the horsehead we found

Now, it gets interesting when things are put in context. Lots of flakes, a horse’s head, teeth and other bones, near the opening of a cave. And then I found a scraper. That’s what’s used to scrape flesh from hide. So, when you put all of the pieces together, what it appears we’ve found is a 40,000 year old mini-horse (a relative of present day horses) who was butchered by Neanderthals at our site.

This is a decently big deal, because I’ve also come to discover that the Neanderthal bones at this site are an unusual discovery…some sites find, say one femur and it’s international news. At this site, the heads of a woman and child have been found, along with mandibles and a hand and teeth. And now, we’ve found actual proof that this was probably a Neanderthal butchering site, so, it turns out, I really WAS sitting where a Neanderthal sat 40,000 years ago.

In the meantime, I’m making connections and plans for future trips and business deals. So far, I may have found a travel partner in crime. A wonderful new friend from England who wants to come and do a dino dig in the States and who I now am invited to visit in the UK. She just told me about a cool Iron Age site in Orkney, off the north coast of Scotland. I’ve also met someone new from Venice, which suddenly gives me a tour guides for there, in addition to the person I already know in Genoa. I’m in! Some of you already know that I’ve also been considering looking for products to export from Spain to the US. It turns out the father of one of the Spanish guys on the dig may have some contacts for me. So, dinner with Dad is on the books.

As for the old man I reference in my post title, that’s my one amusing story to tell. It’s hard to be highly entertained when we’re pretty much confined to a tiny town of 2,000 people. Anyway, after having a big glass of beer one evening, I started noticing details in this small town as we walked to dinner (a liter of beer will do that to a girl). A clump of beautiful flowers growing wild in a crack in the pavement and a beautiful weathered blue doorway, 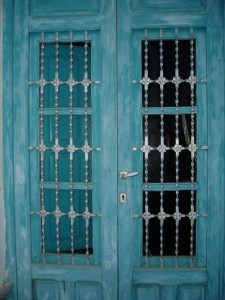 which I stopped to take a picture of. As I turned from taking the photo, an old man was walking toward me and invited me inside his house. Sometimes you just have to go with the flow. The rest of the group walked on, but I was invited to be shown a collection of hand-made models of the town church, the house this 83 year old man grew up in, the Eiffel Tower and the Plaza de Toros in Madrid. This seemed to be his life’s work, since he told me he’d been working on them since 1965 and they literally took up half of his tiny living room. Needless to say, I’ve been invited back for another visit.