I’ve for the first time crossed the international dateline and landed in Beijing a few days ago to visit my brother Joe who’s lived here since 2011 with his wife. I’m across the world and it’s truly a world of difference. 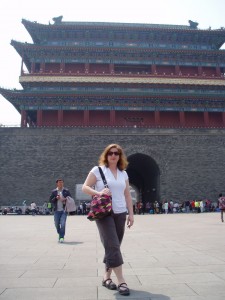 My first taste of Beijing

First impressions after five days here is mainly awe at the audacity of this place and its people. Today, Joe’s wife Wenying took me to Tian’anmen Square, the Forbidden City and two parks behind the city, for my first look-see at this place. Nothing can prepare you for the sheer scale of things. Tian’anmen Square is massively huge. It is literally the world’s biggest plaza and where Mao “sleeps and doesn’t wake up” as Wenying put it. The plaza can hold 1,000,000 people, so it’s impossible to take in the size of it.

Tucked behind the Square is the Forbidden City. Just follow the large picture of Mao and there you are. Well, you and seemingly every other Chinese person who lives here. The Forbidden City dates from the 1400s and was built by Kublai Khan, the grandson of Genghis Khan and as Joe pointed out, the forebears of Chaka Khan. It was a palace up until the early 1900s and if you even tried entering uninvited before it was open in 1911, you would have been beheaded. 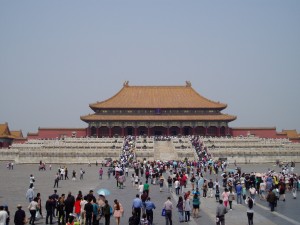 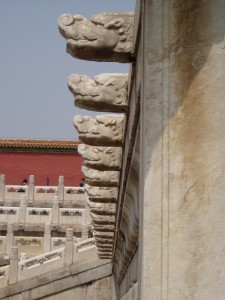 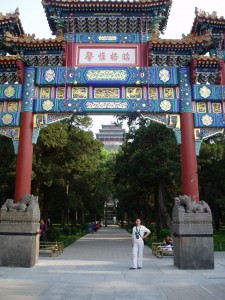 When you think of China, this is what you think of. Beautifully adorned red, blue and gold buildings with lilting roofs. Moats. Dragons. Lots of gold and bronze and building after building and plaza after plaza…all smack dab in the middle of the city. Oh yeah, and did I mention the people? With this many people vying for space, the Chinese have developed some rules by which to live.

I have never in my life been so terrified of being out on the street, in a car, on a bus, in a subway, on a scooter or just walking (apparently sidewalks are for the trees that grow in the middle of them, not for people). There is no such thing as right of way for pedestrians. Cars ALWAYS have right of way, so you better look both ways then look again before crossing a street. While you’re at it, just cross when you choose and wait in the middle of a busy street with buses zooming around you and scooters barely missing your toes. Only 5 days here and I’ve almost died several times. Many streets don’t even have stop signs and cars on the freeway can be two abreast to a lane if they feel so moved.

The Chinese must have eyes in the backs, sides and under their heads, because danger lurks everywhere. As Joe put it, “Safety Third”. And, if the cars, scooters, bicycles, rickshaws, etc don’t get you, the person next to you will. It is common practice to hear a good throat clearing followed by a big goopy loogy shot at the sidewalk in front of your feet. Ick. 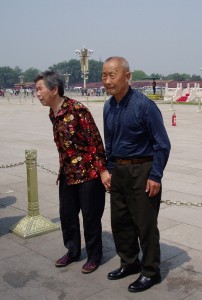 I couldn’t resist taking a picture of this adorable couple.

Taking the train for a 3 day trip to Qingdao (what I recognized by the name of the beer we all know and love Tsingdao) was an experience. I think it would be harder than difficult to navigate this country without a native speaker. We stood in a line (more like a cluster. The Chinese don’t believe in queues…whoever gets there first, wins) to get tickets which they wouldn’t give me because the name on my passport was not the name they had in their system. We were sent to another line, where we waited and got a piece of paper, then were sent to the next line over to retrieve our ticket. Oops. Wrong line, so we went back to line #1 where finally, ticket issued 40 minutes later. Nothing is fast here. To buy something in a department store, you show it to one clerk who handwrites an order for you which you then take to another clerk across the floor who takes your money. Then, you walk back to the original clerk to pick up the goods. Maybe this is why this country has so many Buddhists. It’s easier to just accept your current reality than to fight it. For now, works for me.

1 thought on “Being in Beijing”