It’s funny how, after you’ve been someplace for a few days, things that are initially striking, start to seem normal. 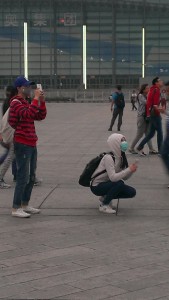 Like, here in Beijing, the air pollution is so bad, Beijingers don’t normally see the sun even when it’s sunny. I’ve been lucky, in that there have been short afternoon showers and winds which cleared the pollution today down to a tolerable 77 AQI (air quality index). Thing is, acceptable in Europe is 50 and under. But, with 77, we’ve all taken a deep breath in, because the day I arrived it was 200 AQI and the city had a notable stench. People here not only tolerate it, but seem to have embraced it, some with stylish masks and all. 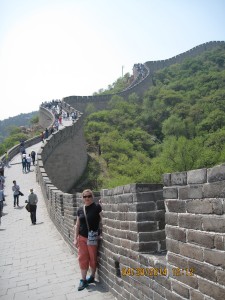 Wenying and I went to one of the stretches of the Great Wall two days ago while Joe was teaching. It took about 2 hours to get there, and when you see the Wall, it stretches for miles…so I’m told. The air pollution is so bad, you can’t see it stretching very far, but I wasn’t complaining. Never in my life did I think I would actually witness, let alone walk on one of the unofficial ancient wonders of the world. At more than 2,000 years old, it was built for protection, but never really succeeded at its job, since China has been invaded by the Mongols, Germans and Japanese over the millenia. The Wall was a surprise to me. You expect a stretch of beautiful wall, along which you can walk forever. Not quite. The Wall goes over all terrain, including mountains, which means it practically has to be climbed at times. It’s worse than the worst of the Seattle steep streets. I felt like a cartoon character in some spots, with my body at what seemed like a 20-degree angle to my feet. But, the experience of walking almost brought me to tears a few times, much like when I stood at the Acropolis in Athens. Standing on a piece of history, along which so many have walked and which has seen so much history. It’s overwhelming. 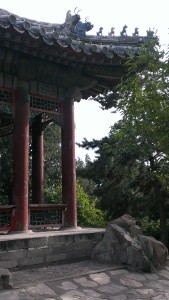 The parts of the city I’m enjoying the most are the ancient buildings and neighborhoods. The yin to the Forbidden City’s yang is the Summer Palace, the Versailles of China’s emperors. It was ransacked by troops in the 1800s, but has been reconstructed around its multiple lakes. It’s soothing to be around greenery and water in a city with throngs of people The irony about the water is that the Chinese do not drink the water. It’s too polluted, so no one drinks tap water. 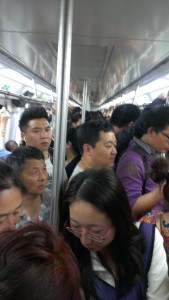 Help! Trapped in a subway with Beijingers on holiday! What? It’s ALWAYS like this?

Beijing has a population of about 21 million people, and I feel like I’ve seen half of them since I’ve been here, especially in the city’s old alleyways called Hutongs. Walking through these narrow streets felt like being in a Chinese, invite only fraternity party. Those millions of people live in a massive city, almost the size of my home state of NJ. It takes us over an hour and 3-4 subway transfers to get downtown from where Joe and Wenying live. It’s an ordeal that is filled with miles of walks, determination and sharp elbows to push your way into a subway car and sprint for a seat. Nevertheless, the city is very safe. It makes me wonder what the difference is in Spain and China that there is not much crime and no undercurrent of fear like we have in the U.S. Seems we have much to learn from a city that’s about 2.5x the size of Manhattan.